Apocaps, the anti-cancer nutritional supplement developed by dog cancer vet Dr. Demian Dressler, reached a milestone recently when its manufacturer was awarded a $244,479 government grant to research the application of its apoptosis-inducing formula for human cancers. 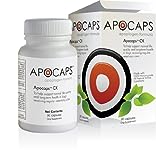 The grant is part of the U.S. government’s $1 billion Qualifying Therapeutic Discovery Project, which offers funding to small companies creating medical therapies with the potential to reduce health care costs, create jobs, improve U.S. competitiveness, or significantly advance the goal of curing cancer within the next 30 years.

Functional Nutrients, the makers of Apocaps, received the largest grant in the entire program.

What Does Apocaps Do?

Apocaps CX Apoptogen Formula for Dogs works by inducing apoptosis in the body. Apoptosis is the medical term used to describe the body’s natural process of genetically programmed, healthy cell death. Apoptosis occurs because all normal cells, whether in a human or animal, are programmed to die. This allows new cells to grow and keep bodies strong and healthy.

But sometimes an event will cause normal cells to go haywire and start dividing too fast, refusing to die and multiplying out of control. These cells do not submit to apoptosis but instead absorb and kill normal, healthy cells. This is the condition we all know as cancer.

Apocaps is a nutritional supplement that utilizes natural plant-based substances such as Luteolin, Curcumin and Apigenin, which have been shown to induce apoptosis the body.

As part of the QTDP grant, Dr. Dressler’s company, Functional Nutrients, will work to demonstrate how Apocaps can induce apoptosis in both canine and human cancers.

The U.S. government’s inclusion of Apocaps in this study will do a lot for these holistically-oriented natural cancer fighting substances that have traditionally lacked the endorsement of the traditional medical community, because of the lack of hard scientific evidence for their effectiveness.

Dr. Dressler says “Apoptosis is a such a fundamental biological process and the ability to induce it in cancer cells using natural apoptogens suggests enormous potential for human cancer patients.”

We think so too! Congratulations Dr. Dressler!